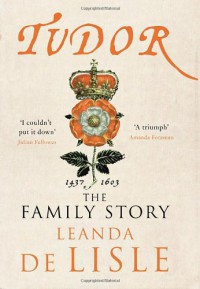 'Tudor: The Family Story' begins at the funeral procession of Catherine of Valois in 1437 in order to relate the origins of the Tudor name. Catherine and Owen Tudor's relationship is depicted as truly romantic. I had quite a chuckle or two as Ms. de Lisle showed she has a slightly ribald sense of humor : "There was music playing, and her servants were dancing. While Catherine watched, Owen performed a leap which span out of control, and he fell straight into her lap. As an Elizabethan poet asked, 'Who would not judge it fortune's greatest grace, Since he must fall, to fall in such a place?' " ( 9 )

Ms. de Lisle explains that "'The story of how Henry Tudor [(i.e.Henry VII)] survived against the odds, and won his throne and his bride against even greater odds, is one of the world's great adventure stories.' It sounded irresistible and indeed how could one understand the king if you only began his life in 1485?" (423)

The author approached this family biography that spanned five generations like a top-notch forensic investigator; sifting through layers of archived evidence; exhaustively gathering information; looking at different angles to uncover hidden reasons and perhaps suggest alternate motives - with an acceptable level of plausibility - for the actions of this fascinating royal family. Ms. de Lisle took great care "to examine more closely not how we see the Tudors from our end of the telescope, but how they saw themselves." (424)

I was happy to read more about Margaret Tudor, Queen of Scots, Henry VIII's older sister, whose husband, James IV was killed at the battle of Flodden against England while Queen Katherine was regent. It seemed so strange and heartless that Henry VIII would take pleasure in the win, and show little remorse at leaving his pregnant sister a widow, his nephews fatherless, and the three vulnerable in Scotland.

I appreciated that Ms. de Lisle stuck to referring to family members and close surrounding characters by their given names, and did not get heavy handed with lining up their titles like cars in a traffic jam (because as we know titles changed hands as quickly as heads rolled). This is one thing I most dislike - that some medieval historians would plaster titles all over the pages; it isn't impressive at all but is rather ridiculously frustrating. Thankfully, 'Tudor' is not an example of such confusion; it is uncomplicated reading, flowed easily and made sense.

'Tudor' is a work of obvious dedication and passion from an author who has brought to fruition a well balanced biography of a dynasty. It is well written, remarkably researched and rationally thought-out. For medieval history fans, this is not only a pleasurable read on a familiar subject; it also provides new insights and a fresh outlook on a fascinating royal family.