The Royal Game and Other Stories by Stefan Zweig 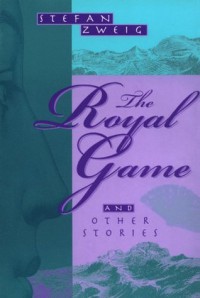 The Royal Game and Other Stories
These exceptional novellas are creatively structured psychological battles, set to challenge Zweig's protagonists. Zweig's specific strength is his psychological narrative, often embedding himself in his stories as a narrator as observed in The Royal Game (aka Chess Story) and Amok. Apart from The Royal Game, all the other stories presented here involve women falling in love with male strangers and keeping "dirty little secrets."


The Royal Game
"A man reveals his character in a chess game...I know well enough from my own experience the mysterious attraction of 'the royal game', that game of games devised by man, which rises majestically above every tyranny of chance, which grants its victor's laurels only to a great intellect, or rather, to a particular form of mental ability."

Zweig pairs two unusual subjects he labelled as 'monomaniac' in the great game of chess to examine the psychological effects of "brainwashing" (a technique which fascinated Zweig because of his interest in Psychology) brought about: (1) as a result of nature, and (2) by torturous treatment.

Czentovic, a peasant simpleton "who couldn't put three sentences together correctly", challenges Dr. B., who had once been held in solitary imprisonment in severely sensory-deprived conditions. Dr. B. emerges from the abuse and brutality of the Nazis not a 'whole' man psychologically, whereas his opponent was created intellectually less developed by the hands of nature. The agonizing and strategizing over the chessboard was a nail-biting experience and would wear out even the most conditioned of men.

"All at once a new element had sprung up between the two players: a dangerous tension, a violent hatred. They were..two enemies who had sworn to annihilate each other."

The final pages of the story prove Zweig's brilliance; it comes about so subtly that if you don't read it carefully you just might miss it.

Amok
'Amok' is a cry of warning uttered by Malays when one of their number becomes violently insane and runs amok: "A paroxysm of murderous, mindless monomania which isn't comparable to any alcoholic poisoning.. It seems to be something to do with the climate, with that sultry, oppressive atmosphere that plays on your nerves like a thunderstorm until they snap."

This story centers around a young doctor stationed in a remote district in the Dutch East Indies. He becomes obsessed with a married English woman who seeks his help with a discreet situation, but who contemptuously rejects his crass pursuit, causing his complete lapse of self control and leads him to run maniacally amok.

"I had no influence over myself... I didn't understand myself anymore. I was totally consumed by my obsession with an objective."

The doctor tries to make amends for his behavior by attending to the woman's last wishes, but fails at that, too. Zweig planted himself in this story, serving as narrator of the doctor's dramatic, morbid tale, weaving psychological suspense with all the human flaws of "the wrong and the wronged."

The Burning Secret
Zweig uses the theme of the sexual awakening in a twelve year old as he witnesses a growing relationship between his mother and an idle baron while on vacation. Zweig experiments with broken innocence in a coming-of-age situation, using Oedipal undertones between Edgar and his mother; as well as the boy's youthful admiration and obsession with the adult male character.

They're hiding something. They have a secret they don't want to share with me. I must find out what it is all costs.. I'm going to snatch this terrible secret from them...

Emotions of suspicion, jealousy, humiliation, and disturbing passions are revealed through the points of view of each character in this triangle.

Nothing sharpens the intelligence more than emotional suspicion. Nothing awakens the imagination more in an immature mind than to be following a trail in the dark. Sometimes there is only one single, flimsy door separating children from the real world, as we call it, and a chance puff of wind will blow it open.

Fear
A married woman is blackmailed over her secret love affair, sending her into a spiral of nervousness and anxiety. When thoughts of being found out run in a heated cycle of paranoia then regret, I felt the pounding of fear in my own veins.

"All limbs felt restless and heavy, filled with the leaden weight of fatigue that made them almost hurt but nevertheless prevented her from sleeping. Her whole existence was undermined by gnawing fear, her whole body poisoned, and in her heart she actually longed for this ill health finally to break out and some obvious pain, some really tangible, visible, clinical disease for which people had sympathy and understanding."

Fear was the first Zweig story I'd ever read; a marvel of psychological insight into a desperate woman's mind that instantly made me put his name on the read-more-of-this-author-list.

Letter from an Unknown Woman
"I will reveal my whole life to you, a life which truly began only on the day I first knew you".

An unidentified woman sends a letter to her former lover, a famous writer so self-absorbed that he doesn't even recollect the woman with whom he once had a passionate affair. She starts her lengthy letter with the telling of a death, and proceeds to pour out her memories of their encounters with love and melancholy. As he reads it, he shows only the dimmest and most muddled memory of her. Zweig's story of passion, pain and self-sacrifice against cold aloofness and emotional detachment is deliciously melodramatic and sorrowful. This is quite possibly my favorite piece in the collection.