I Served the King of England by Bohumil Hrabal 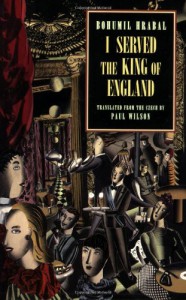 Man's body and spirit are indestructible...he is merely changed or metamorphized
- Bohumil Hrabal, I Served the King of England (1971).

Hrabal's satirically political, erotically imagined and poignant adventure story follows the rise and fall of a young busboy Ditie (Czech for 'child') who, being diminutive in stature, possesses big dreams and the determination to become a millionaire to be the equal of everyone else: is influenced by his father's advice to have an aim in life because then he'd have a reason for living, initiates his rise at the brothel 'Paradise'- a habit-forming place that, from Ditie's innocent viewpoint, is so wonderful and forbidden that I wanted nothing more in this world,... because at last I'd found a beautiful and noble aim.

His adventures surrealistically course through farcical scenes of life in wartime Prague, though he stumbles upward without much thought to moral implications, idealizing and fervently learning from the distinguished headwaiter who knows everything about everything because, as the latter puts it: "I served the King of England." Ditie's steps to elevated stature are vividly imagined, particularly in one ironic episode where he effortlessly fumbles into serving the Emperor of Ethiopia, Hailie Selassie: the similarity in their physical sizes is not lost on the reader.

I learned that feeling victorious makes you victorious, and that once you lose heart or let yourself be discouraged the feeling of defeat will stay with you for the rest of your life, and you'll never get back on your feet again, especially in your own country and your own surroundings, where you're considered a runt, an eternal busboy.

With Hrabal's signature taste for the absurd direction of Fate, his hero becomes the millionaire of his dreams but through the establishment of communism, loses that long sought-for stature, along with the freedom he thought it would afford him.

The final portions of Ditie's story are the most poignant, with a theme that the author often uses in his novels: memories, self reflection, and the expectations of one's life. Ditie becomes a road mender, and in his loneliness, he contemplates the direction he let his life take, coming to some profound conclusions of integrity and morality.

..the maintenance of this road was the maintenance of my own life, which now, when I looked back on it, seemed to have happened to someone else. My life at this point seemed like a novel, a book written by a stranger even though I alone had the key to it, I alone was a witness to it, even though my life too was constantly being overgrown by grass and weeds at either end. But as I used a grub hoe and a shovel on the road, I used memory to keep the road of my life open into the past, so I could take my thoughts backward to where I wanted to begin remembering...and so arriving, in this back and forth way, at the meaning of life. Not the meaning of what used to be or what happened a long time ago, but discovering the kind of road you'd opened up and had yet to open up, and whether there was still time to attain the serenity that would secure you against the desire to escape from your own solitude, from the most important questions that you ask yourself.